When the London to Paris cycling event had to be postponed this year due to the Pandemic, our intrepid cyclists did not use this as an excuse to sit back and relax. Instead, when the MCF set up their Covid 19 Support Fund, their thoughts turned to how the cycle team could try to raise monies, under the current restrictions, which continue to limit numbers congregating together. So – the 100 mile challenge was born.

The Event saw a team of 14 cyclists boarding a train in Darlington or Durham whilst their bikes were being taken by van to Berwick. Unfortunately, despite best laid plans, the cyclists train was delayed and the team were almost an hour late in arriving at the start point. Thankfully the ever able support team of Paul Quinn and Harry Prince had the bikes all lined up and ready and the team were under way very shortly after arriving.

With their usual precision the organisers, Gavin Rowell and Steve Piercy, had pre-circulated the planned route to all of the riders and this promptly resulted in a small detour when the team got lost trying to get out of Berwick. In short order however the riders were on the National Cycle Route 1, the Coast & Castles route that they had followed 2 years previously. This time however they were trying to cover a route that had previously taken 2 days in only 1!

NCN1 proceeds out of Berwick through Spittal and over Goswick Golf course before turning to cross the A1 near to Belford. The route has sections over some rough sheep tracks which promptly resulted in the ever accident prone Phil Twizell having the first of his minor falls. Thankfully there was nothing more bruised than his pride.

After some strenuous climbing away from the coast the team then headed back towards Bamburgh where they were delighted to meet up with the PGM, John Arthur and his wife Joan who had travelled up to offer their support. After a brief respite however, conscious of the late start, the riders were soon back in the saddle, heading through Seahouses and down to a lunch stop in Amble. In view of the Covid restrictions it wasn’t possible to arrange a meal for such a large group and, instead, the team settled down in the sun for a picnic by the harbour where they were again joined by the PGM and his wife and also this time by the Festival Director John Thompson and his wife Andrea.

By late afternoon the team were on their way South again, heading for Blyth and on towards Tynemouth. By this time fatigue was starting to set in with a number reporting issues with cramp and, as the wind speeds picked up, progress slowed. It soon became apparent that the team were not going to make it back before nightfall, particularly after 2 punctures within a matter of only 200 yards. This had, however, always been a risk and the riders had appropriate bike lights and nice bright MCF cycle shirts. They proceeded inland to the Tyne Pedestrian Tunnel before heading through Washington and then on, in the dark, to the finish at Chester-le-Street Masonic Hall. 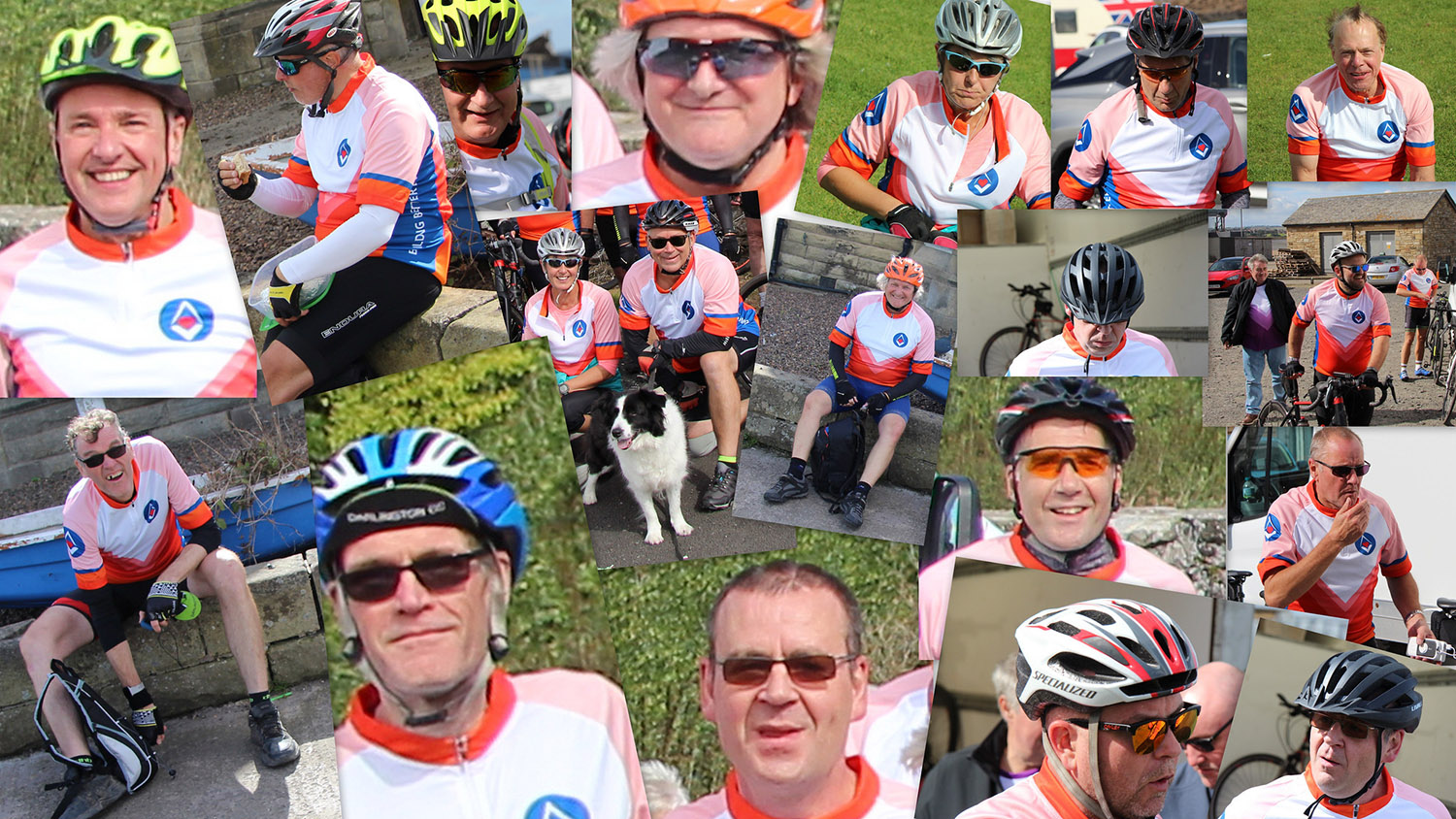 Some of the team were visibly emotional as friends and family cheered them over the finish line before they downed a well-earned drink or two and some delicious food that Gavin’s wife Tracey had kindly laid on for them.

Including Gift Aid the Team have raised over £5000 and the sponsorship is still coming in. Well done to all. Roll on London to Paris next year