Every brother is encouraged to become a Festival Steward by donating a minimum of £480 (Excluding Gift Aid) towards the 2021 Festival appeal. This equates to a regular contribution of just over 26 pence a day, £1.85 per week or £8 per month over 60 months (5 years).  This is less than the price of a daily paper, or a cup of coffee per week.

Once donated, or promising to donate by regular Direct Debit, the sum of £480, those qualifying will receive an email notification from the Festival Secretary, then if they so wish can apply to receive a Festival Jewel free of charge.

Jewels will be distributed from February 2016.

If you have been contributing in the past few years via continuous giving you may have already qualified. To find out contact the Festival Secretary Paul Quinn, who will be able to provide you with an update on your giving to date.

The Province fully understands that it may not be within every Brother’s means to qualify for a Jewel but does appreciates every donation made. These are the final grants to be awarded through Stepping Stones scheme.

The Royal Masonic Trust for Girls and Boys have awarded over £250,000 to ten charities across England and Wales through its Stepping Stones scheme, bringing the total grants awarded by the scheme to over £1.3 million.

Stepping Stones was launched in 2010 and is just one of the ways that Freemasons support young people in their communities. Over the past five years, grants have been awarded to 63 local and national charities, removing barriers to education and employment for thousands of disadvantaged children and young people.

These are the final grants to be awarded through Stepping Stones as the Trust will become part of the new Masonic Charitable Foundation from April 2016. The Foundation will provide the full range of support currently available from the existing central Masonic Charities to Freemasons and their families, and to charities working with disadvantaged young people Our Raby Gala Director Andrew Foster who himself if an Old Masonian made the trip to pay his own personal tribute and join the Old Masonians Association as they attended the annual remembrance service at the Girls school in November, where the President was invited to read the first lesson and at the conclusion  lays a wreath at the war memorial which holds the names of all Old Masonians who fell whilst in service. This war memorial was originally at the Royal Masonic School for Boys in Bushy and was moved to Rickmansworth when the School closed.

Andrew then attended the “Drill” demonstration which is carried out by some 200 pupils. This drill is now unique to this school and there is a link on YouTube where you can see the full drill. You need to watch this until the final movement where the Girls make a resemblance of the Square and compasses. (If any mason ever forgot which way up these symbols are displayed on the VSL this will provide a lasting reminder). The final act is for each girl to remove their poppy and place them on the floor so when they depart the S & C remain on the floor.

In this hall there are stained glass windows depicting each Province and individual lodge who helped to finance the building of the school. Andrew found and photographed the Province of Durham (see attached) 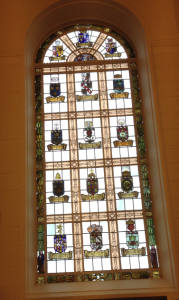 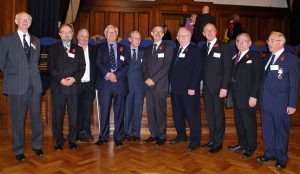 Andrew with the Old Masonians 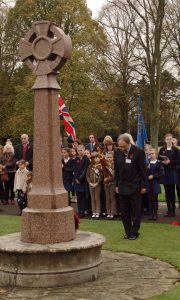 The President laying a wreath at the war memorial

All then retired for lunch in the dining hall which is followed by the OMA committee meeting. Our four Charity Stewards seminars have been a tremendous success with over 200 attending at Gateshead, Shiney Row, Ferryhill and Stockton as we covered the Province.  Festival President Norman Eric Heaviside along with other members from the Executive were there in attendance to support the Festival Team. Eric opened the seminars and addressed all who attended before handing over to John Thompson, the Festival Director.

John along with Paul Quinn, Andrew Foster, Edwin Jeffrey, Andrew Thompson and many other members of his team, via a projected PowerPoint display, went on to explain the fundamental objectives the 2021 festival which was to raise funds for the RMTGB but equally to raise awareness for the charity and importantly how the  brethren could access the support.

The main announcement of the meetings was the qualification amount to become a Steward of the Festival, for the commitment of just over 26p a day which equates to £8 a month (not including gift aid tax) for 60months / 5 years the recipient if they wish would receive a festival Jewel free of charge.

The Festival Director encouraged everyone to start the continuous giving if they had not already done so.  A monthly commitment now for the qualification amount would entitle them to receive the Jewel at the start of our Festival , which would allow them to wear it for the entire festival period.

John went on to thank everyone and the brethren of Durham for the fantastic support to date, through the continuous giving process or the ‘dripping tap’ as the PGM likes to refer to it we have raised £700,000 to date.

He pointed out repeatedly in the presentation the importance of Gift aid Tax, and how the donations through continuous giving, the gift aid envelope scheme and individual fund raising activities we could maximise the donations by an additional 25%, as he put it “Money for nothing”

The Gala Director Andrew Foster gave an update on the Gala preparations and encouraged lodges to book their stall and take part in what will be the biggest single fund raising event during the Festival.

With now less than 100 days away from the festival launch, Andrew Thompson, The Launch organizer, explained over 700 tickets have already been booked for the Sage festival launch, which is going be a variety performance highlighting children who have been supported by the trust along with local talent of which it is hoped every Lodge will be represented.

The final date for the allocation of Lodge tickets has been extended to 20th November.

Tickets can be posted out if a SAE is enclosed with the application or they can will be able to be collected from the Sage Box office from 2.30pm onwards on the day, January 24th 2016. The show will then start at 7pm, so book now!

The meetings  was then drawn to a close and very close to which Eric Thanked John and his team for the hard work they have done so far in setting up all these seminars and the behind the scene works in providing all the information.

Similar 30minute lodge presentations can be booked by Lodges by contacting  paul.quinn@durham2021.org

You are all invited to the North East Corner Raby Castle Luau on Saturday 2nd July 2016. This is a once in a lifetime event and will take place in the grounds of Raby Castle. It promises to be a relaxed night of Hawaiian fun and live entertainment.

Guests will receive a traditional Hawaiian welcome from 7pm, followed by a taste extravaganza of Beach party food. The headline entertainment for the evening will be The Stonecutters before finishing off with some party music to dance the night away.

Make sure that you dress for the occasion in your grass skirts and coconut bras (That is just the fellas). Ladies, wear what you feel comfortable in but ensure it’s bright, colourful and make sure you are ready to dance your flip flops off. There will be a prize for the best dressed person on the night but an even bigger award for the worst dressed guest.

Tickets are £20 per person and can obtained by sending a cheque made payable to “North East Corner” and a stamped self-addressed envelope to:

We anticipate high demand for tickets for this event so make sure you apply early to guarantee your place. A limited number of Free Child tickets are available (under 16 years) but please be warned that it is at parents discretion if children stay after 9.00pm as this is designed as an adult party environment.

Make sure you bring your friends and family along for the night of their lives.

Further information can be obtained from Barrie Tudberry at barrietudberry@hotmail. com or check out our NEC Raby Castle Luau Facebook page for further updates.

Tickets are also available in person from the following NEC members;