Commercial Travellers Lodge No 5089 welcomed the Assistant Provincial Grand Master, Gordon Brewis to help them celebrate their 90th Anniversary and to present him with a cheque to the value of £1800.00 , towards the Durham 2021 Festival and thereby achieving their Gold Award target.

The Worshipful Master Edward Jenkinson invited Past Master Alan Neil to deliver the 90 year history of the Lodge from its beginnings in 1929, formed by 25 “bona fide”  Founder Commercial Travellers, some of whom came from as far away as London and Plymouth. With the demise of the profession of Commercial Travellers the Lodge By Laws were altered in 1967 and the main criteria for membership was altered to initiate ‘ Good Men and True ”  The Lodge Chaplain Phillip Etherington conducted a memorial to deceased brethren which was followed by prayers. The Charity Steward Steven Noble then gave a summary of the Lodges substantial  charitable giving over the last 15 years.

The celebration festive board was a jovial affair and made extra special with each brother receiving a set of cuff links bearing the Lodge insignia and a laminated place mat to remember the occasion. The splendid meal which followed was rounded off with a specially baked birthday cake by Elaine, wife of the Secretary Graham Wharton.

The Provincial Director of Ceremonies for the evening,  Grahame Haran then conducted the appropriate toasts of the evening. During his reply to the Provincial toast Gordon Brewis thanked the Lodge for their welcome and for providing a very special evening for all present. Gordon made special reference to the generous cheque for £1800.00 achieving Gold status and indeed putting the Lodge on its way to Platinum. The Charity Steward Steven Noble was then asked to come forward where he was presented with the Gold Award pin badge marking the achievement. The Worshipful Master was also presented with a framed Gold Award certificate.

The evening was further enhanced with entertainment provided by Merrick Hamilton in his own unique style. It was said at the outset that to be a Commercial Traveller you had to be a “Charmer” and there is no doubt that on the evidence this evening that this is a “Charming Lodge”. 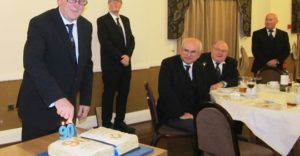