The November meeting of Corinthian Lodge No 5808, saw their magnificent charitable achievements recognised by the Provincial Grand Master John Arthur. John, accompanied by a team of Provincial Officers, was delighted to award Corinthian Lodge with their Platinum Certificate and Award on the evening. The Platinum Award itself, came after the Lodge members and their supporters raised over £21,000 towards the Durham 2021 Festival. Corinthian Lodge’s Charity Steward, Jamie Rielly, was also awarded the Platinum Badge by John in recognition of the Lodge, and their supporters, outstanding commitment in their charitable endeavours since the start of the Durham 2021 Festival.

The Assistant Provincial Grand Master, John Thompson, was then invited to give an illuminating video and PowerPoint presentation regarding the work of the Masonic Charitable Foundation (MCF), as well as reviewing the wide range of charitable events that had taken place, in support of the Durham 2021 Festival, across the 2019 calendar year. John thanked all those who had given their time, energy and commitment in supporting the 2021 Festival to raise over £2.5 million to date, towards the Festival target, at the rate of over £10,000 per month!

John also reminded those assembled of the great friendships and Masonic bonds that can develop from such activities and further encouraged individuals to continue to support the 2021 Festival in whatever way that they can.

Then, to make the evening even more special, fourteen Freemasons, from a variety of Lodges across the Province, who had actively participated in a range of events such as walking, canoeing, cycling, skydiving, skiing, ‘Dragon Boat’ racing & the Great North Run were asked to gather on the floor of the Lodge. John Arthur and John Thompson then took great delight in awarding each participant with their well deserved 2019 Festival Supporters Medal. Consequently, those assembled, in the packed Lodge room, duly showed their appreciation of their charitable efforts and Corinthian Spirit!

At the well-attended Festive Board, John Arthur stood to respond to the Toast and began by formally recognising Corinthian Lodge’s huge achievement in raising over £21,000, 130% of their Festival target. He then formally presenting the Platinum Award to Corinthian Lodge’s Worshipful Master Paul Westgarth who had already presented John with a further £2150 on the evening for charitable causes.

Upon the closure of the Festive Board many of those in attendance remained to enjoy the company and fellowship of old and new friends alike. Many congratulations to the members of Corinthian Lodge upon their Platinum Award, and to the medal winners for their charitable achievements ! 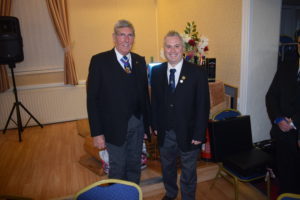 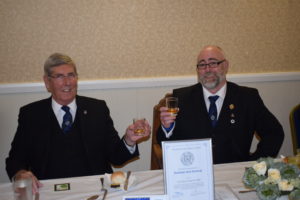 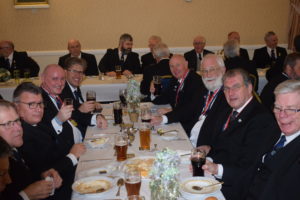 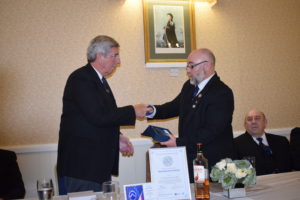