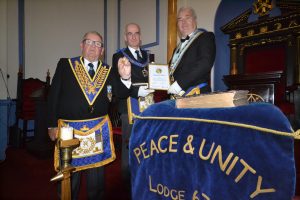 After witnessing a superb lecture from the Provinces’ Grand Orator, Bernard Hope entitled “Betsey Ross…Twilight Gleaming”. Craig then had the great pleasure in presenting the Lodge with its Durham 2021 Festival Gold Award. Craig praised the Lodge members for joining the other 11 Lodges in the East, thus far, who have attained the Gold Award, before presenting Michael Brown, the Master of the Lodge, with a framed Durham 2021 Festival Gold Certificate in acknowledgement of the Lodge achieving its Festival Target. Craig then went on to say that he was so proud that over £500,000 thus far, been raised for the Festival, from the East of the Province. He then presented Robin Middleton, the Lodge’s Charity Steward, with a Durham 2021 Festival Gold Pin Badge, to be worn throughout the Festival period until 2021.

The festive board was attended by visitors from Hong Kong, Canada, Cambridge and East Yorkshire, helping make this evening a special occasion. After the toasts, Eric was again ‘showered’ with gifts from the ‘East’ namely a Hong Kong Vase and a case of his favourite ‘Queen Street’ beer with an engraved trinket from the East end of Sunderland, no doubt leaving Eric with more fond memories of his visits to Queen Street. 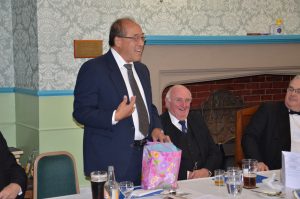 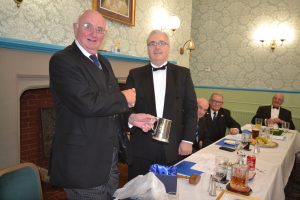