As the festival appeal has gone on the ways to raise money have become harder and harder to come by. It occurred to me that it might be possible to use a sport I am passionate about to raise funds for the festival. The idea was discussed with the Festival director and a plan formed to try and encourage as many people as possible to get involved, it was hopped that by setting several smaller targets building to the main target of skiing the height of Mount Everest that people who perhaps had only done a small amount of skiing might want to participate and after a meeting between W.Bro Thompson, myself and the Head of the Ski School at Sunderland we also decided to provide lessons for anyone that might want to learn how to ski in order to take up the challenge. The event was then put to the membership. Unfortunately, we had no takers for the lessons, but on Sunday 7th July 2019 just under 10 skiers descended on Silksworth Sports complex ranging in age and ability with our oldest Participant Malcolm at the age of 85. Many were supported by family and friends. We where joined by W.Bro Thompson and the obligatory Photo shoot took place and shortly after 12:00pm we were off the descents started to mount and as the afternoon wore on. At around 2pm we where joined by the PGM RW. Bro John Arthur and his support spurred us all on with Steve one of our younger skiers completing his 56 descents Shortly there after Steve then took a short break before returning to the slope to complete a total of over 100 descents which total more than the height of all 3 mountains combined. All told we hope to have raised more than £2500 and are already looking at options for next year. 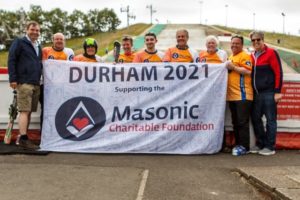