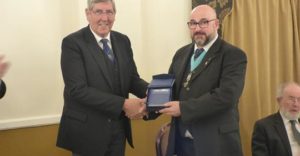 Trinity Lodge No. 4751, who meet in Darlington, were celebrating achieving Platinum for their Durham 2021 Festival target at the January 2019 meeting.   At the meeting Steven Wilcock presented John Arthur, the Provincial Grand Master for the Province of Durham, with a cheque for £1,700 on behalf of the Lodge members.  John advised the brethren that this takes the total amount raised to £33,765 and qualifies for the Platinum award.

John thanked the members for the warm welcome he received and the generous donation, congratulating them on their achievement.  John also paid particular thanks to the Lodge Charity Steward, Simon Atkinson, for his continued efforts.  Simon thanked the members for their continued support and also stated that the success is absolutely down to their efforts.  Over 50% of Trinity Lodge members are signed up to the continuous giving scheme making monthly payments to the Festival by direct debit.  John Thompson, Assistant Provincial Grand Master and Festival director, was also in attendance and explained all about the Festival for the benefit of the lodge’s newest member, Jeffrey Crowe, who was initiated at the meeting.

Simon was presented with the charity steward’s Platinum lapel pin by John and the Lodge also received a certificate and crystal award which John suggested they may want to display at the festive board for future meetings.